The silencer adapter for Sig P226 Air pistol : use a suppressor on your pellet gun

Using a suppressor on a firearm helps to lower its noise. But it’s an advantage you may also want to enjoy on a pellet gun. So we offer this silencer adapter for Sig P226 Air pistol, to satisfy recreational shooters. It will allow you to use a silencer in 1/2 UNF or 1/2 UNEF, for plinking sessions in the backyard, without disturbing the neighbors.

By the way, Sig Sauer’s P226 CO2 airgun already has a threaded barrel. But it is a M12x1 thread, for which it will be very difficult to find a suppressor. So we offer to convert this exotic standard into one of the two threads most widespread on small caliber guns. You will then be able to use a 22 LR silencer with real internal baffles. A silencer that can effectively reduce the sound of your shots.

This pellet gun thread converter is specifically designed for the Sig P226 Air pistol from the Sig Sauer Airguns series. It will work indifferently on the black version as on the FDE version. However, it will not be suitable for the numerous other air replicas of Sig P226. So please make sure that you have the right Sig P226 shooting pellets / steel BB’s before placing your order.

Naturally, this silencer adapter for Sig P226 Air pistol can also be used on other airguns with M12x1 threading at the end of the barrel. But this presence of M12x1 threading remains essential.

It may also be suitable for converting the thread of a firearm. For example, one of our customers acquired it to equip a Walther G22, and reports us perfect compatibility. So now we can also talk about it as a “silencer adapter for Walther G22”.

Just because the silencer adapter for Sig P226 Air pistol is intended for an air gun doesn’t mean we’re neglecting its manufacturing quality. We make it in the same XC38 steel as our other thread converters. We use the same CNC machines. Its concentricity is perfect, and its durability flawless thanks to hot bluing. To tell the truth, it could be used for a firearm if there was one with M12x1 thread.

An oblique knurling on its outer diameter makes it easier to screw/unscrew by hand. No need for a tool to install it on your Sig Sauer pellet gun. However, it may be wise to cover the male end with a barrel thread protector when no silencer occupy it. This will prevent deformations in the event of a fall or shock during transport. 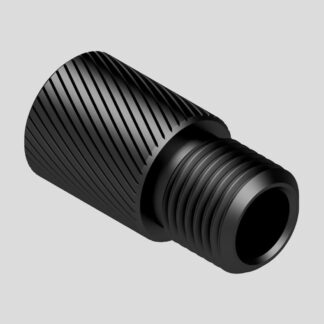 You're viewing: Silencer adapter for Sig P226 Air pistol – 1/2 UNF or 1/2 UNEF 22,50 €
Rated 5.00 out of 5
Select options
Select your currency
€ Euro
$ United States (US) dollar
£ Pound sterling
CHF Swiss franc
Manage cookie consent
To provide the best experiences, we use technologies such as cookies to store and/or access device information. Consenting to these technologies will allow us to process data such as browsing behavior or unique IDs on this site. Failure to consent or withdrawing consent may adversely affect certain features and functions.
Manage options Manage services Manage vendors Read more about these purposes
See preferences
{title} {title} {title}