Use our silencer adapter for airsoft gun with 14mm CCW thread and screw a real silencer with baffles onto your air weapon. Here we offer you to transform the original M14x1 LH thread into a 1/2 UNF or 1/2 UNEF firearm thread. A custom part shipped wordwide.

The best silencers become compatible with your airsoft gun !

The point is still the same. Allow the use of a real firearm suppressor on your airgun. Yes there is no detonation gas to modulate. But the presence of successive baffles will still hinder the propagation of the sound wave at the muzzle. So leave out “airsoft silencers” that are often just a hollow tube, and opt for the best .22 LR silencer.

On the weapon side, this thread converter can be screwed onto any male thread in 14 mm CCW. Note that the 14 mm CCW stand for 14 mm Counter ClockWise. In the world of firearms, we refer to it as M14x1 LH or Metric 14 left hand. All these names actually designate the same suppressor thread, measuring 14 mm in external diameter, and screwing to the left.

Note that we already produce M14x1 LH to 1/2 UNF or 1/2 UNEF thread converters in our custom silencer adapter for rifle section. But they’re designed for large caliber rifles. The silencer adapter for airsoft gun with 14mm CCW thread on this page is a smaller version. It’s lighter, shorter, thinner. So you won’t unbalance your weapon by unnecessarily weighing it on the front.

Features of this custom part for airgun

We machine this airsoft gun thread converter into XC38 steel, also known as C35. To do this, we use the latest generation of CNC machines. Our customers therefore benefit from a high-end manufacturing quality, and perfect regularity.

Each adapter has a depth of 14 mm (0.55″). This is enough to fully cover the thread length of most replicas. But still check yours before placing your order. The internal channel that will allow the projectile to pass through is bored to 9 mm. That’s more than enough for a 6 mm plastic BB or a 4.5 mm pellet.

To facilitate screwing/unscrewing by hand, each silencer adapter for airsoft gun with 14mm CCW thread undergoes oblique knurling. Our hot bluing subcontractor then performs the black surface treatment that will protect the steel from corrosion.

A custom part made in France, that we are proud to ship worldwide. Consider also taking the thread protector 1/2 UNF or 1/2 UNEF that goes with it !

Show reviews in all languages (2) 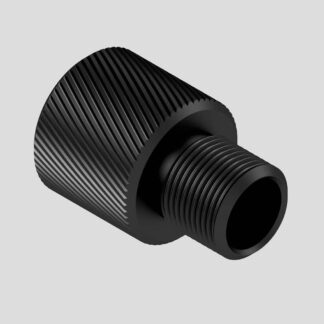 You're viewing: Silencer adapter for airsoft gun with 14mm CCW thread 22,50 €
Rated 5.00 out of 5
Select options
Select your currency
€ Euro
$ United States (US) dollar
£ Pound sterling
CHF Swiss franc
Manage cookie consent
To provide the best experiences, we use technologies such as cookies to store and/or access device information. Consenting to these technologies will allow us to process data such as browsing behavior or unique IDs on this site. Failure to consent or withdrawing consent may adversely affect certain features and functions.
Manage options Manage services Manage vendors Read more about these purposes
See preferences
{title} {title} {title}