To use a suppressor on your single-shot pellet gun, choose our silencer adapter for Artemis PP700S-A. It will be compatible with PP700S-A models only, in .177 caliber as .22 caliber. A custom part that allows the use of a 1/2 UNF or 1/2 UNEF silencer (optional) on your PCP airgun. Careful French manufacturing, made of blued steel.

Use a suppressor on your Artemis pellet gun

Want to shoot quieter with your Artemis/SMK/SPA PCP airgun ? So check out our silencer adapter for Artemis PP700S-A Made in France on CNC machines. It complies with strict tolerances and offers flawless concentricity.

Unlike many competitors, we manufacture this adapter out of steel. It is an S235JR (also called A37), blued for long-lasting resistance to corrosion.

Once the adapter is mounted, your pellet gun will become compatible with the majority of .22 LR silencers on the market. So you can reduce the shooting noise, and consider discreet domestic sessions.

How do I use the silencer adapter for Artemis PP700S-A ?

This silencer adapter is intended for Artemis PP700S-A PCP single-shot pistols. By the way, models in .177 and .22 caliber are included. Note that Artemis pellet guns are sometimes sold under SMK or SPA brands. These weapons are still identical and therefore compatible with the adapter offered here.

This accessory will replace the original muzzle cap. It can be unscrewed using a suitable tool, or removed in force, even if it means being destroyed during the operation. This will not be a problem, since the adapter can then stay mounted on the weapon permanently.

This custom piece plays the role of “bushing” : it centers the internal barrel in its shroud. Its central channel ends with an 8 mm hexagonal pattern, allowing tightening with an Allen key.

Which silencers will be compatible with this silencer adapter for Artemis PP700S-A ?

This custom piece is intended to stay mounted on the weapon, even when shooting without silencer. We therefore suggest you to cover its outer thread with a suitable barrel thread protector. This will save it from shocks, so you can enjoy a workable interface for a long time. 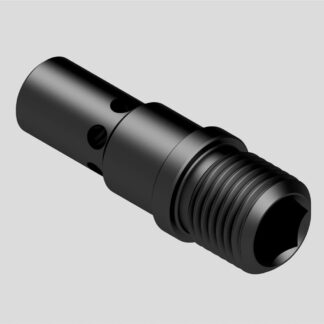 You're viewing: Silencer adapter for Artemis PP700S-A – 1/2 UNF or 1/2 UNEF $32.95
Rated 5.00 out of 5
Select options
We use cookies to ensure the best experience on our website. If you continue to use this site, we will assume that you are satisfied.Ok