The silencer adapter for Ruger Mark IV, III and II : No thread? No problem

Ruger pistols derived from the Ruger Standard come in 4 generations, from Mark I to Mark IV. There are different variants within each generation, depending on whether you want to practice plinking, precision shooting or even hunting. Some of these variants are threaded, others are not. This is where our silencer adapter for Ruger Mark IV, III and II comes in.

Because the .22 LR is particularly easy to silence. But your gun still need a thread to accommodate a suppressor. For those who are not so lucky, we offer an ingenious system squeezing against the front sight of the gun. You will thus obtain a 1/2 UNF or 1/2 UNEF thread ready to use, without modification of your weapon. It’s simple, reversible, and as effective as a direct thread.

Compatibility of this adapter

This silencer adapter for Ruger Mark IV, III and II will work on all pistols with a cylindrical heavy barrel. We traditionally refer to them as “bull barrel”, but “fluted bull barrel” and “slab sided bull barrel” are also welcome. This includes Ruger Target,Hunter, 22/45 or Competition.

On the other hand, tapered barrels (also known as “pencil barrel”) will not be compatible.

To protect this interface from shocks when no silencers occupy it, consider having a proper barrel thread protector.

How do I install the silencer adapter for Ruger Mark IV, III and II?

Turn the two spacers so that their openings are no longer facing the front sight. Then slip the adapter’s body on the barrel, encompassing them. Then screw the tightening nut on the adapter’s body, to press it against the muzzle of the barrel. The inside of the adapter’s body is conical, so the whole assembly will always remain perfectly centered. This keeps the pistol accurate, with optimal bushing.

The perfect solution to use a silencer on an unthreaded Ruger Mark IV, III or II without weapon transformation. 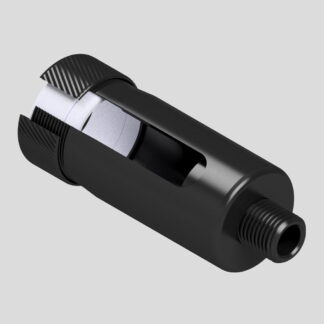 You're viewing: Silencer adapter for Ruger Mark IV, III and II 115,00 €
Rated 5.00 out of 5
Select options
Select your currency
€ Euro
$ United States (US) dollar
£ Pound sterling
CHF Swiss franc
Manage cookie consent
To provide the best experiences, we use technologies such as cookies to store and/or access device information. Consenting to these technologies will allow us to process data such as browsing behavior or unique IDs on this site. Failure to consent or withdrawing consent may adversely affect certain features and functions.
Manage options Manage services Manage vendors Read more about these purposes
See preferences
{title} {title} {title}