Our 5 prong flash hider is perfect for breaking the flash of a short-barrel assault rifle, or for giving your .22 LR rifle a martial look. It is a custom muzzle device 100% made in France, available in 1/2 UNF, 1/2 UNEF, M16x1 and M16x1 LH. All steel CNC manufacturing.

Your rifle shows its teeth

On short-barrel rifles or carbine length rifles, it is common for some of the gunpowder to not have time to be consumed inside the barrel. So she does it at the muzzle of the gun, causing a brief but vivid flame, a flash. It is to break this flash that we make this 5 prong flash hider.

It will disperse the burning gases when they’ll get out of the barrel, limiting their recombustion in the air. The user thus gains in shooting comfort and limits his visual signature in the field. Therefore the 5 prong will be perfect for long guns using a fast ammo, typically assault rifles in .223 Remington / 5.56 NATO (AR15 and derivatives, Steyr AUG, Mini 14…).

Of course, it can also be considered as an aesthetic accessory to customize a firearm with a hunting or sporting profile. So if you think that the visual of your .22 LR rifle is a little boring, boost its aggressiveness by bearing teeth (“prong“, got it ?).

We make this muzzle device in different threads:

Because yes, our flash suppressor is virtually compatible with all bullets with a diameter less than 12mm (0.47″). If you feel like it, you can therefore use it on an annular Browning T-Bolt as well as on a long range bolt action rifle in .308 Winchester.

If your weapon is not threaded into any of the available standards threads, feel free to convert it with one of our silencer adapters.

Our 5 prong flash hider is a custom accessory that we manufacture in France on CNC machines. We use an S235 JR steel (also called A37). Its mechanical characteristics make it a standard when it comes to construction steel. Once the part is done, it undergoes an industrial hot bluing that protects it from corrosion.

To allow a good tightening, we make a hexagon at the base of the flash guard. So that a 20 mm (13/16″) wrench can be used to secure it on the weapon. Note that the design of the 5 prong is non-directional. So no need to index it : screw it completely, its positioning will always be optimal. 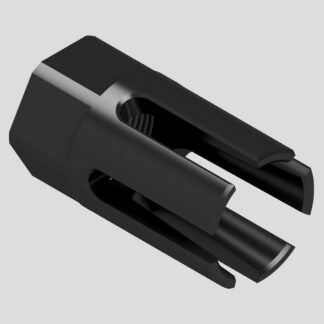 You're viewing: 5 prong flash hider – thread of your choice $67.11
Select options
We use cookies to ensure the best experience on our website. If you continue to use this site, we will assume that you are satisfied.Ok