Fans of CO2 airguns also like to be discreet. So we offer this silencer adapter for Walther Lever Action, intended to your Umarex air rifle. A custom part for using a suppressor in 1/2 UNF or 1/2 UNEF.

Air guns are perfect for recreational shooting at home. But sometimes their shooting noise is enough to disturb your neighbors. So we offer a silencer adapter for Walther Lever Action, to make your pellet gun quieter.

Most of the time, airguns manufacturers don’t think about integrating a suppressor interface to their productions. But sometimes, the mechanical architecture of the weapon allows for a custom part. This is the case of the CO2 lever action rifle that Umarex produces under the name Walther Lever Action.

Once a silencer is mounted on the weapon, it will stifle the snapping of the shot to improve your discretion. Unfortunately, pellet gun silencers are often just a hollow sleeve, with no real effectiveness. So we make this adapter with a 1/2 UNF or 1/2 UNEF thread, to allow you to use “real” suppressors. Those that are designed with several internal baffles, usually for .22 LR rifles.

However, this silencer adapter will not be usable with the Legends Cowboy Rifle model shooting steel BB’s (reference 5.8394-1).

How does it work?

The Walther Lever action air rifle has a kind of cap at the end of its barrel. This cap actually acts as a centraliser for the inner barrel inside its shroud. Just remove it, and replace it with our silencer adapter for Walther Lever Action. You will then have a male thread on which you can mount your suppressor. 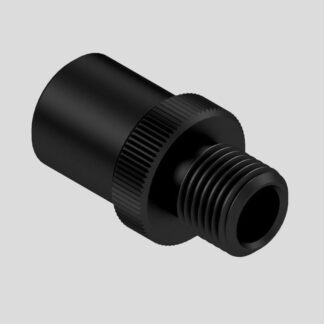 You're viewing: Silencer adapter for Walther Lever Action 24,90 €
Select options
Select your currency
€ Euro
$ United States (US) dollar
£ Pound sterling
CHF Swiss franc
Manage cookie consent
To provide the best experiences, we use technologies such as cookies to store and/or access device information. Consenting to these technologies will allow us to process data such as browsing behavior or unique IDs on this site. Failure to consent or withdrawing consent may adversely affect certain features and functions.
Manage options Manage services Manage vendors Read more about these purposes
See preferences
{title} {title} {title}